After some relaxing days spent seaside, it was time to head inland for a taste of real Mexican life, and what better place than Mexico’s second largest city; Guadalajara.

We took a very affordable flight direct from La Paz to Guadalajara, and unlike third world Hamilton, Guadalajara has Uber, so we were able to swiftly reach our accommodation – Olga Quierida B&B Hostel – before it was too late at night. This is a great hostel smack-bang in the Centro Historico, with some great eateries and sights within 15 minutes walk. It was pretty quiet for our four nights there, so we cannot comment on the social atmosphere, but the value was great, and had a very homely vibe with a nice breakfast and fully equipped kitchen. Lucy, our host, also spoke excellent English, making for more easy transitions to Latin American life. 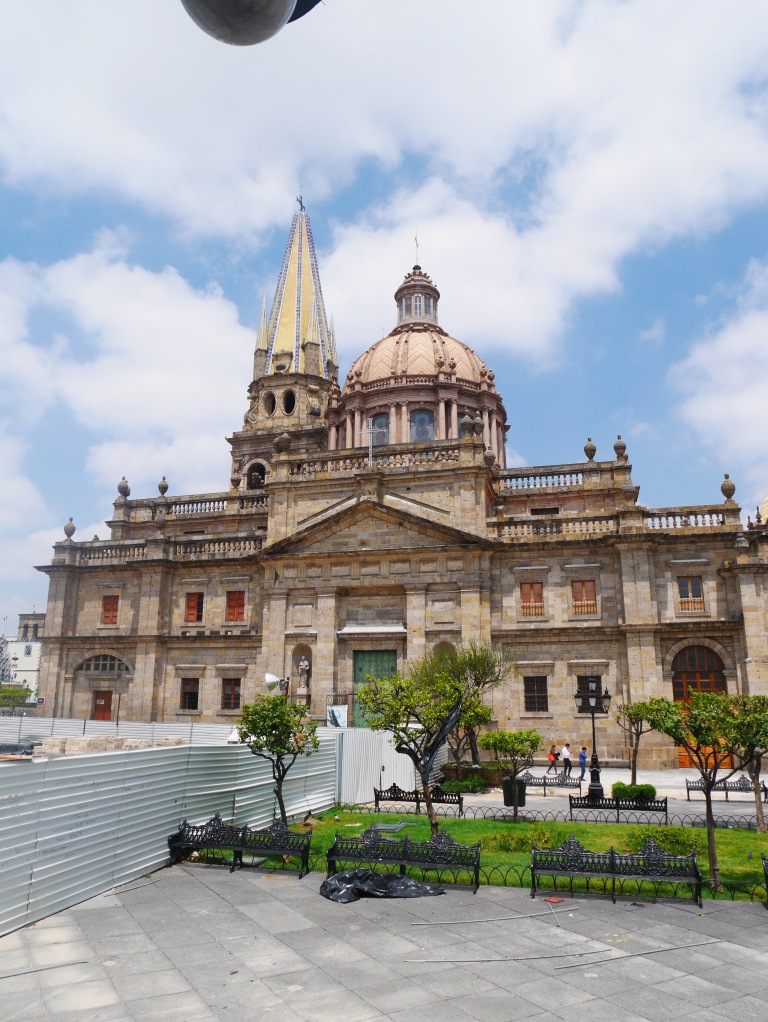 Our first day was spent as all first days in big cities are spent – exploring the city centre and historical sights. The first thing that struck us about Guadalajara was the obvious European influence on architecture. While walking through this historical suburb, you could swear you were in a colonial Spanish city in Europe.

Guadalajara has a pretty easy sightseeing trail to follow – starting at the main Cathedral and heading east along Plaza de la Liberacion & Plaza Tapatia the to the Instituto Cultural or vice versa. We decided to start at the Instituto Cultural, which is a pretty imposing building set in a massive square. We also seemed to be some of the only tourists around, which was a cool feeling.

The Instituto Cultural de Cabanas houses a plethora of Mexican folk art and murals by several famous artists including Jose Clemento Orozco. This guy is responsible for the incredible murals inside the main building (Capilla Mayor) of this complex, and having been to the Sistine Chapel, it certainly drew comparisons for both of us. We were also treated to an exhibit dedicated to caballeros, or horses, where artists and sculptors from around Mexico had paid homage to arguably man’s most tested animal companion. This exhibit showcased the importance that horses have played in shaping society, from transport to war. The building itself is also a wonderful piece of architecture, and we came out pleasantly surprised with how much we enjoyed it. 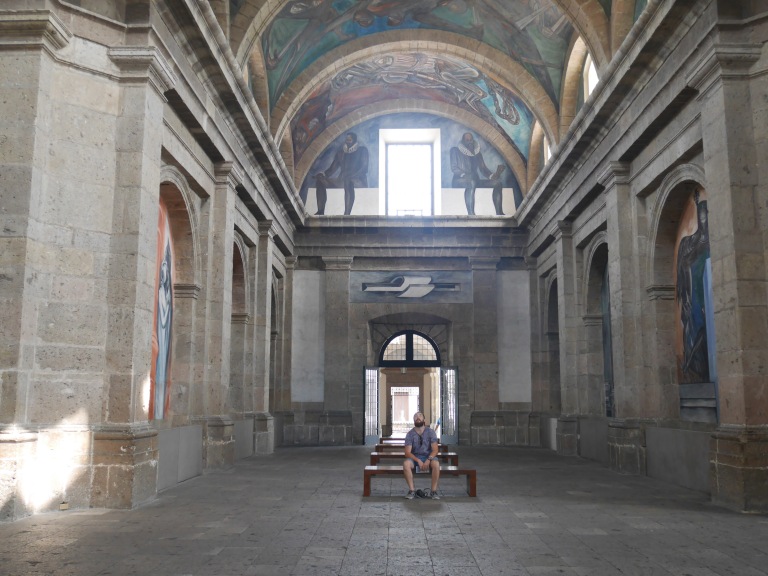 We meandered down the Plazas, taking in our first taste of Mexican street life. With Guadalajara being such a large city, vendors who sit street-side do not yell a you or pester you like the smaller tourist towns in Baja, so it was nice to feel like random strangers again. As you walk, there is plenty of shopping, food and entertainers, so it makes a great place to grab some food and people watch. Once you have walked far enough, you will reach the Cathedral, set at the west end of Plaza de Liberacion. This is really quite amazing, and like we said, gives you that feeling of being in a European city. After taking some photos, we decided to head into the Museo de Regional Guadalajara, which details some natural and human history about the state of Jalisco. This wasn’t quite as good as the Instituto Cultural, but there is a sizeable mammoth skeleton in here which was pretty cool. 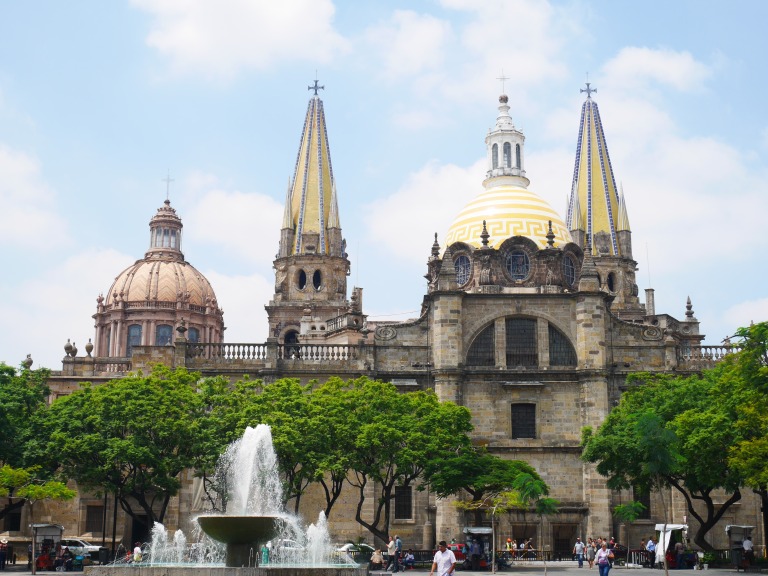 Our second day we decided to head out of the centre to the outer suburb of Zapopan. The main draw here is the Basilica de Zapopan, which houses Nuestra señora de Zapopan. With neither of us being religious, we weren’t entirely sure why this cathedral was so important, apparently thousands of people gather annually when the señora is taken from Zapopan to the Centro cathedral. However, we did find out on our tour the following day that Lady Zapopan is credited with the eradication of earthquakes in the area, and banishing rainfall to only occur overnight. While a little skeptical, we can confirm there were no earthquakes in Guadalajara during our stay, and it did in fact rain 3/4 nights we were there, but only between 11pm and 5am. Spooky.

On our final day we did the token tourist-y thing while in Guadalajara – took a tour to the town of Tequila, and the La Rojena distillery – the main distillery of Jose Cuervo. We booked a tour for this, which was about $33USD/pp. e had an incredible guide, Alejandro, who took the time to repeat himself in English and Spanish for the entire trip.

Anyway, we took a shuttle out and stopped in at the agave fields, where a local Jimador (name given to the agave field dudes) Juan , who demonstrated how agave plants are harvested.

It was actually really cool getting to see where tequila comes from, an the time and effort that goes into these plants. Agave plants are only harvested once they reach 6-10yrs old, which makes it very difficult for any newcomers to the tequila scene. Tequila is also given the same distinction as champagne, meaning that only distilleries in the region have the right to call their product tequila!

Anyway, we moved on to the distillery, and we were given a tour around the distillery. This included trying some raw agave, cooked agave (actually quite delicious), and learning about the process and the different types of tequila. Turns out that gold stuff is not recommended for shots. Jonny tried a few of their tequilas (Alex was quite unwell that day) and we looked around the gift shop, where the bottles were veeery reasonably priced. For their top end tequilas, it was only around $18-$24USD for a bottle. If we were big on our tequila, we would have grabbed a few bottles for sure!

We had a great time in Guadalajara, and it was a great introduction to a more authentic side of Mexican life. Our budget for 4 days was $350USD (inc. flights);

We cooked for ourselves a couple of nights again here, and the only really expensive thing we did was the Tequila tour. Plus, the hostel was quiet, so there wasn’t much drinking to be done! It was great to come under budget after our run in with the cops in La Paz!

One thought on “Guadalajara”